Instagram Stories – Knock Off? Or Knock Your Socks Off?

Instagram Stories – Knock Off? Or Knock Your Socks Off? 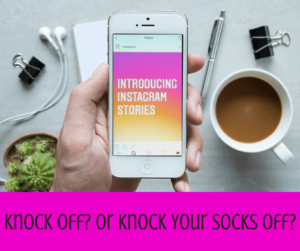 Stories are a neat way users of Snapchat have been able to share life events about themselves on any given day. It’s been very popular since its release in October of 2013, making it the most common way Snapchat is used. Making cool videos about yourself and your daily life is more popular than ever. And now, Instagram is going full steam ahead with its own version of “stories,” and many are calling it a better option despite being an unapologetic copy-cat. Let’s take a look at a few things people are saying.

When you first open Snapchat, you’re given the camera; when you first open Instagram, you’re given your news feed. This difference of priority plays a major part in making each platform unique. Many people are finding Instagram to be a better experience in that regard. After all, most people are consumers looking to keep up with their favorite celebrities, artists, bands, etc. Having to swipe away the camera page to bypass it between checking personal messages and your feed can make Snapchat’s UX feel laborious.

Instagram uses a progress bar that runs straight across the top of the screen, simultaneously showing you how many posts this person’s story contains and how close you are to finishing up their whole story. There’s even an animation to show you when the story you just watched ended and another is about to begin.

In addition, you can swipe backwards to view someone’s story a second time — something that’s much harder to do in Snapchat’s one-way-only flow; immediately after you view someone’s story, tapping their handle takes you to a private message instead of letting you replay their snaps.

Snapchat does offer you the ability to see how many users are watching each of your snaps. But, in order to see who specifically saw the individual posts in your story, you have to tap into each snap separately and swipe up to check it, then swipe down to close it, and then swipe down again to leave the post before you can choose a new one to view. On the contrary, Instagram sends you off to a different flow once when you’re interested in the numbers and will show all the numbers and viewers at once.

This is a fundamental difference that’s always existed between the two platforms. In Snapchat, the only number associated with your account is your Snapscore that lives on your profile page and is the product of an unclear scoring system many users don’t understand. On the other hand, Instagram is all about clear, very public summaries: number of posts, number of users following you, number of users you follow, number of likes per post – it’s a more straight-forward system, numerically.

So… How Is This Allowed?

Many are puzzled as to how IG can get away with what looks like such a blatant rip-off, and understandably so, given that Stories has been such a staple of Snapchat. Instagram CEO, Kevin Systrom, went so far as to even give full credit to Snapchat but noted that he thinks of Stories as a “format” — like the algorithmic feed or hashtags that Twitter and FB both took from each other — and that the real innovation is how well you make it your own when implementing the same idea.

Legally speaking, there’s nothing wrong with this. Ideas are intangible; though they can be protected by patents, they cannot be too “abstract.” Even the first creation of “stories” is really just a spin on the whole idea of social network statuses, which did not originate with Snapchat.

Stories may become more common as the various social platforms create their own versions. For now, it will be interesting to see how IG’s “Stories” function performs, and whether or not it will give Instagram an edge over its rival, Snapchat.